In the Beginning…  Herman Rednick

Rarely a man or woman comes along who truly seems to live more in the world of the angels and of the Spirit than of this world. Such a person was Herman Rednick. From his youth, the psychic door to other realms began to open. Through his application of yogic techniques focused on higher beings, this door to other worlds swung wide.

As an artist he had the unusual opportunity to depict in his paintings the subtle realms he experienced within. He painted the visions of his meditations: the Christ, the Holy Mother, his master, Saint Francis, the Tibetan yogi Milarepa, and devas of nature and of celestial worlds.

Herman Rednick also taught, at no charge, meditation classes to encourage others to open their hearts and minds to these higher planes of love.

Herman Rednick was born in 1902, graduated with honors from the National Academy of Design in New York City in 1927, and was drafted into the army in 1942, serving in the Pacific.

Following WWII, he moved to Taos, NM, and continued his study of art. Although Herman explored artistically the unique Taos subjects of the day–the stunning sunsets and the classic faces of the people of Taos Pueblo–he also deepened his artistic exploration of his life’s passion, the spiritual reality and presence he lived in and experienced visually in his meditations. These visions formed the foundation for his mystical paintings.

In 1969 Herman started teaching meditation classes to a small group in Taos, giving the techniques he employed to open his vision to higher realms, and teaching the truths of love and service and the essential unity of the world’s religions.

About twelve years and many more students later, Herman’s students built with volunteer labor the Meditation Temple on Quintana Road in the community of Lorien, a former commune started in the late 1960s. Lorien is located in the northern neighborhood of Questa called El Rito, about 7 miles north of Questa, NM. Meditation classes have been ongoing since then.

The Herman Rednick Center, the former residence and art studio of Herman, now serves as a private retreat house and gallery of his mystic spiritual paintings.

The last fifteen years of his life he devoted both to painting and to teaching meditation and “the Path of Love and Service.” He died in 1985.

The Path of Love Teachings

Herman Rednick taught the transformation of the personality through love and service that opens us to experience the spiritual reality or presence in our lives. He taught that we are not alone in this journey, but accompanied by angelic beings and a spiritual brotherhood, and that there is a sacred destiny for every person and for the earth itself.

His teachings evolved out of his own intense meditation experiences. He explored the mysteries of ancient Egypt and Tibet, reflected on the life of Christ and the New Testament, and meditated on nature, opening the door to unseen worlds. His teachings include lessons on the nature and development of love, the higher worlds, healing, the Holy Mother, the reappearance of the Christ, the use of daily life as yoga, the use of marriage as a spiritual path, and Western esoteric and Tibetan traditions.

Techniques for the spiritual work include gratitude for every experience, love for every person we know, re-writing negative experiences, creative expression, meditation, visualization, and mantra. These tools help to transform the personality and clear the channel for the light and love of the true self and soul.

There is also a well-established Path of Love group in Tucson, AZ, started by Robert and Diana Van Arsdale, students of Herman, as teachers.

Herman Rednick studied painting at the National Academy of Design in New York City from 1923 to 1927, graduating with honors for his figures and portraits. He exhibited at the National Gallery in New York and at galleries in Philadelphia and Washington, D.C. As his inner life intensified through his practice of meditation, the subjects of his paintings moved from portraits, nudes, and landscapes to vivid and prismatic depictions of inner worlds. Beginning in 1936, his mystical paintings were exhibited in New York and later in Los Angeles, Ojai, Santa Fe, and towards the end of his life, exclusively in Gallery A, in Taos, NM.

Herman’s paintings chronicled his inner journeys. Early paintings include a series in watercolor from his meditations on the life of Christ and a series in oil on canvas of esoteric images (1940s) After he moved to Taos, his works show ancient Mayan temples and modern-day events suggesting a spiritual dimension. A variety of lithographs range from depictions of Christ healing the leper to the spirit of war to portraits of men and women in Taos Pueblo (1950s-60s). Caseins from this period are detailed renderings of mystical subjects. In his later oils (1970s-80s), a palette of intense rainbow-like colors reveals a world of temples on high mountain peaks, a spiritual brotherhood, and spirits of nature.

Since the images in Herman’s painting were inspired by his meditations, these paintings may be used as objects of meditation and can act as doorways to higher states of consciousness. 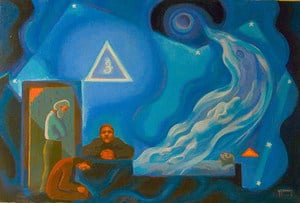 The widely diverse community of Earth Journey with its exquisite meditation temple, Tibetan Buddhist stupa, two residential houses and campground with bathhouse and kitchen for retreatants, and a Chartres-style labyrinth, started quite simply with the remarkable teachings and experiences of Herman Rednick and the enthusiasm for the spiritual path he imparted to seekers.

Before Herman died in 1985, he predicted that in 7 years another would come to carry on the teachings. In 1992, the Venerable Lama Karma Dorje of the Karma Kagyu lineage of Tibetan Buddhism met students of Herman Rednick in Santa Fe. They soon introduced him to the meditation group in El Rito. At the request of the community Lama Dorje directed the building of a stupa — also known as a chorten — to honor Herman and Herman’s own personal devotion to Milarepa, one of the founders of the Kagyu lineage of Tibetan Buddhism. Two of Herman Rednick’s students donated land for the project, one of whom gave seed money for construction, and had embraced Buddhism. Thus Kagyu Mila Guru Stupa was constructed, largely with volunteer labor from Herman’s students. The stupa was consecrated in 1995 by the Venerable Bokar Rinpoche and Yangsi Kalu Rinpoche.

The name of this stupa acknowledges Milarepa (Mila) as well as (Guru) Herman. Lama Dorje also loved that Mila Guru sounded like the Spanish word “milagro,” which means miracle. Thus began a long and enduring spiritual partnering with Tibetan Buddhism.

Shortly after the stupa’s construction, in 1997, Lama Chodrak joined the community as resident lama and taught Tibetan Buddhist practices to a widening group of students. He remained as a resident Lama for nine years. At his invitation, as well as Lama Dorje, and invitations from the sangha, many great teachers have come, and continue to come, to the community to teach; Very Ven. Thrangu Rinpoche, Very Ven. Bokar Rinpoche, Very Ven. Mingyur Rinpoche, Ven. Khenpo Tsultrim Rinpoche, Lama Rinchen, Lama Lodro, Lama Thinley Dukpa, Lama Dudjom Dorjee, Khenpo Jigme, Lama Karma Mingma and many others.

All during this time, Path of Love meditation gatherings continued at the temple, along with “Yoga of the Beloved” retreats taught by some of Herman’s first students, Robert and Diana Van Arsdale.

In 2006 a retreat house was constructed with donations and labor largely from the Buddhist sangha community, and that same year Lama Chodrak returned to India. Since then the Kagyu Mila Guru Sangha has continued to invite Tibetan Buddhist lamas and rinpoches to teach and offer retreats.

In 2013, another early student of Herman’s returned to Lorien and began teaching a weekly class on another of Herman’s profound influences: the works of Alice A. Bailey, who wrote in cooperation with the Tibetan teacher, Djwahl Khul, between 1919-49.

Where We Are Now 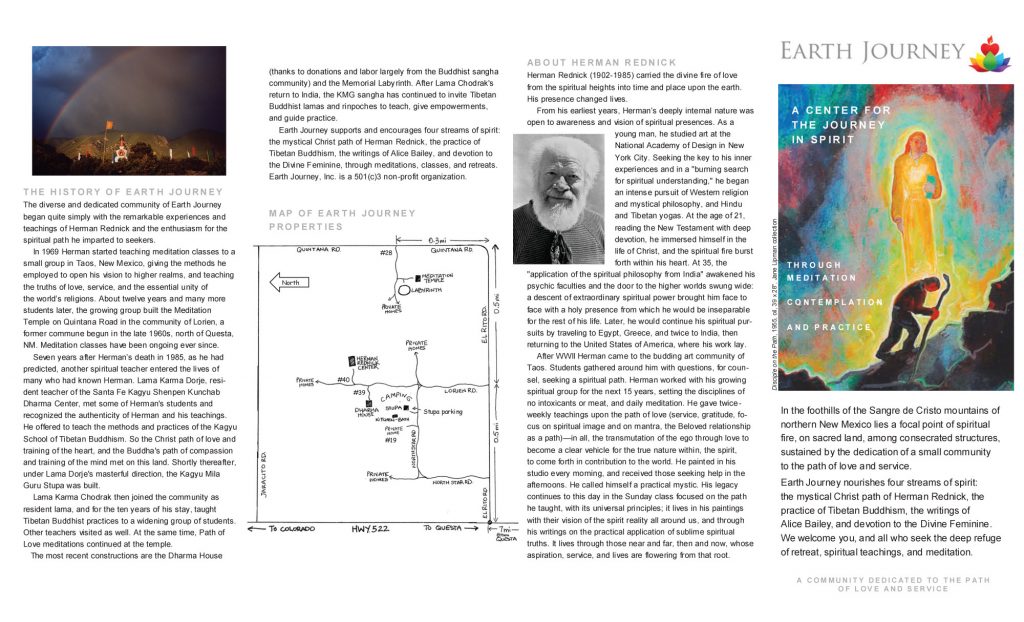 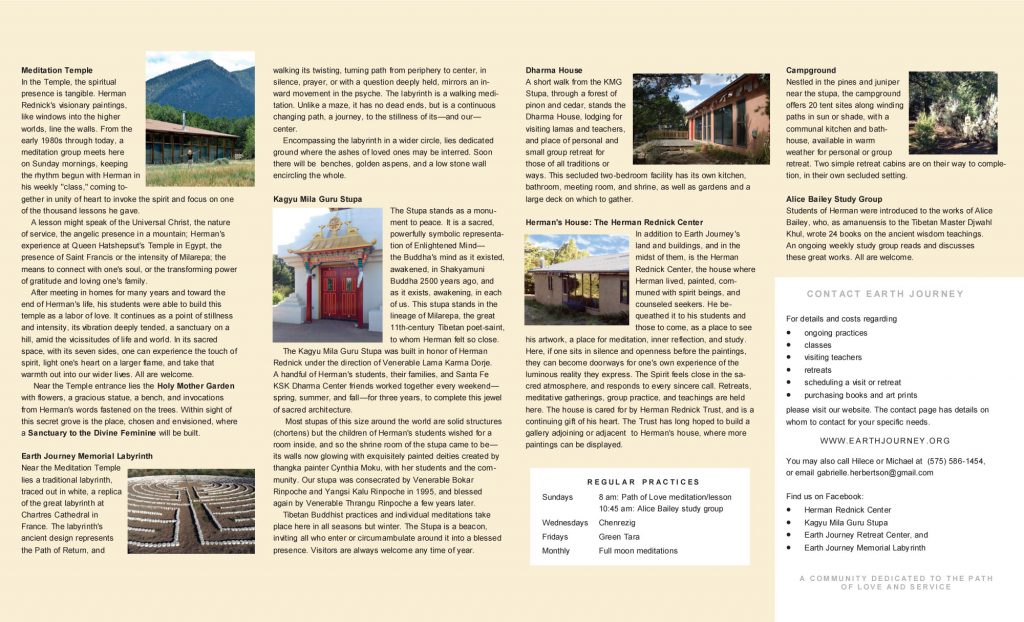 Through their facilities and campus, Earth Journey also offers to the community a space for workshops, spiritually-oriented retreats, and other gatherings which benefit the community at large.

The Kagyu Mila Guru Stupa is one of several stupas identified by artist Cynthia Moku as comprising a larger being, as depicted in her “Dakini Map,” and pilgrims to these stupas along the Rio Grande are most welcome to visit.