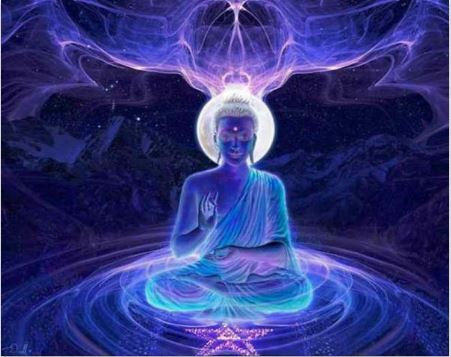 Communion and meditation gathering will be held Friday, April 29, at 7:30 pm at the Herman Rednick Center, 40 Lorien Road, in El Rito neighborhood, north of Questa.

(thanks for the image from artist Francis Donald)

Every year this same mantra is repeated! The importance of the first three spiritual festivals of the year – Aries, Taurus and Gemini, can never be emphasised enough; although to personally experience them, one must probe their significance through reflection upon these signs and meditation. Taurus marks the high-water mark of the spiritual year because of those Liberated Beings who guide Humanity, meet in yearly conclave and connect with their ashrams and disciples more closely than at any other time.

They gather to receive literally, the “Word of God”, the new impulse that was released in Aries – and transmit the annually amended Planetary Plan to Humanity – via their ashrams of disciples. All is planned according to ray and astrological cycles, the constantly changing state of the world, and co-operation with humanity – who must remain free to determine their own destiny.

The opportunity at any full moon festival is to link and work subjectively in meditation by oneself or with other co-workers and groups around the planet. A full moon festival takes place over five days – 2.5 days either side of  the exact full moon time, but for most participants, the 24-hour period beforethe exact time is the most potent period to participate; a microcosm of that time span is one hour before the exact time of the full moon. This full moon falls on April 30.

Taurus-Wesak is the highlight of the year because of the alignment that takes place between our most exalted planetary guides and humanity. The triangle of Buddha, Christ and Sanat Kumara (in the etheric or upon the physical plane), linked in sacred ritual with the assembled Masters of Wisdom – in turn, aligned with their respective ray ashrams of human aspirants, disciples and initiates – all poised and ready to anchor and disseminate the new impulse issued in the previous month of Aries – this is a potent visualisation in meditation.

That anchoring process occurs via Taurus, an earth sign that is conducive to the descent of spirit or the Will aspect from the planetary crown chakra, Shamballa. Taurus also rules the New Group of World Servers who function collectively as the ajna centre of the Lord of the World, Sanat Kumara.

Wesak is important because it is the only time of the year that the Buddha re-connects with this planet, almost liberated from his responsibilities here, but still serving an important role in this transition phase between the two zodiacal ages and the root races. As the two main groups of Earth Chain and Moon Chain humanity further integrate, the Buddha’s role will be taken over by his brother The Christ, marking an event in planetary history that will have reverberations throughout the solar system.