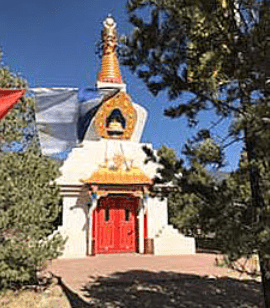 Dear friends, With great joy we announce a 3-day retreat, Friday through Sunday, July 8-10, of Buddhist Monlam prayers—aspirations for world peace and to remove obstacles troubling our planet and her beings.

Lama Chopal will lead us. We’ll sit in the shaded area outside the stupa and chant in both Tibetan and English for two sessions a day. On Sunday afternoon we will host a community potluck (what Lama calls a “potluck party”) followed by a beautiful short concluding prayer for light (the Lamp offering prayer), and then music from all who wish to offer*.

Texts will be provided. Bring your own sun protection, water, mask if you choose, and seating if you need it—we will have both cushions and chairs set up. Also, if you wish, at the end of the retreat, it is traditional and welcome (but not required) if you were moved to make an offering of any amount to Lama. We’ll have a donation box, or you can connect with him directly.

Sunday July 10
9-11:30 Monlam prayers
12-2 potluck lunch with the community!
2 Lamp offering prayer
Music! into the afternoon (bring an instrument to share in song or contact us for something more formal*)

Contact us:
• If you plan to come to the prayer sessions, so we can plan space. Fine also to just drop in.
• If you are traveling a distance to come and need a cabin or campsite for the retreat
• *If you want to set up a musical performance (more formally than simply joining in) with your band or group.
• If you would like more information or have questions

Monlam aspiration prayers for world peace were first held in Bodhgaya India, where the Buddha was enlightened under the Bodhi tree. There, each year in winter, thousands of people gather for the prayer festival—great lamas, monks and nuns, teachers and students, lay people—to make these prayers for 10 days together. Other countries now hold their own Monlam prayer gatherings, including North America. We are glad to be adding our aspirations and heart wishes to all the others, one great prayer for the one humanity and the one earth.

LAMA KARMA CHOPAL was born in East Tibet in 1965, and became a monk at the age of eleven. At fifteen he became a student of Sonam Nyima, the most advanced master of iconographic art in the Karma Kagyu Lineage. He studied Buddhist thangka painting, mandala design, and other art forms for ten years.
In 1989, Lama Chopal went to India to complete his monastic training at the major Kagyu monasteries. He studied at Rumtek, the monastery of the Karmapa, and completed his three-year retreat at Sherabling under Mingyur Rinpoche. Thereafter he spent three additional years at Sherabling studying Tibetan monastic arts of torma making, ritual music, and chanting. Lama Chopal studied Buddhist philosophy at Dzongsar College in India for six years. Following studies in advanced meditation with Bokar Rinpoche, Khenpo Tsultrim Gyamtso Rinpoche, and other Kagyu lamas in India and Nepal, Lama Chopal came to the U.S. in 2001. He completed two stupas over the course of six years for Kagyu Thubten Choling in New York state, and Samchenling in Virginia.

Thank you, and please join us for any part or all of this retreat and coming together.
Blessings,
Gabrielle
Kagyu Mila Guru Sangha, Earth Journey, Herman Rednick Trust