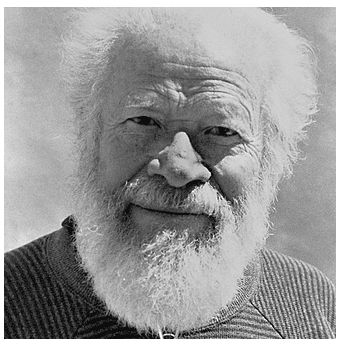 Every year an anniversary memorial for Herman Rednick is held to mark the date of his passing. Herman was a great artist and spiritual teacher with many students. This year it will be held on Sunday, April 17, at 11 am, by Zoom and in person, at the Earth Journey Meditation Temple at 28 Quintana Road, in El Rito. Afterward, around 1 pm, join us for lunch at the Herman Rednick Center, 40 Lorien Road. Bring your own food, to keep us all safe.

Herman was born in 1902 in Philadelphia and after art studies and service in World War II, went on spiritual searches in India, Greece, and Egypt. He arrived after service in WWII in Taos, and became a spiritual guide to many. Herman suggested the property on which the Lama Foundation was built and some of his first students were its founders. In the early 1970s, after the disbanding of the Lorien Commune in El Rito, he began to guide students on a meditation path with love as its focus, and service to the world.

Before Herman died in 1985, he predicted that another teacher would come in seven years. In the seventh year, Lama Karma Dorje of Santa Fe came to the community in El Rito and helped build a stupa honoring Herman. The Kagyu Mila Guru Stupa.

Lama Dorje encouraged the group to hold a memorial each year to honor Herman. Until recently, Lama would attend each year, but age and health concerns now prevent his traveling here to the gathering.

Herman advised many of us to also study Alice A. Bailey’s books and a faithful (and international) group continues to meet and study this “ageless wisdom,” based upon The Tibetan’s work, that complements the Kagyu Buddhist path. The group is led by Francis Donald at info@earthjourney.org: all are welcome (meetings are held by Zoom).

For more information on the memorial or to attend, contact Gabrielle Herbertson at info@earthjourney.org.