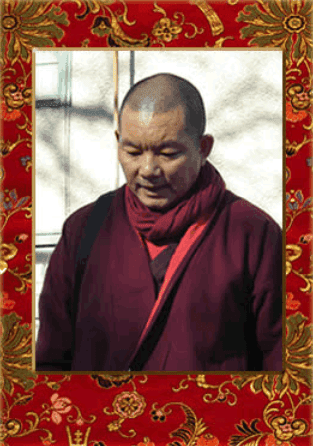 Earth Journey, KMGS, and Herman Rednick Trust invite you to an in-person and Zoom teaching event. Lama Karma Chopal will teach on the Six Bardos as explained by Dudjom Rinpoche. This teaching will be translated by Lama Zopa Jigme.

Dudjom Yeshe Dorje Rinpoche (1904-1987) is one of Tibet’s foremost yogins, scholars, and meditation masters. Considered to be the living representative of Padmasambhava, he was a great revealer of the ‘treasures’ (terma) concealed by Padmasambhava. A prolific author and meticulous scholar, Dudjom Rinpoche wrote more than 40 volumes, one of the best known of which is his monumental The Nyingma School of Tibetan Buddhism: Its Fundamentals and History. Over the last decade of his life he spent much time teaching in the West, where he helped to establish the Nyingma tradition, founding major centers in France and the United States.

ABOUT LAMA KARMA CHOPAL He was born in East Tibet in 1965, and became a monk at the age of eleven. At age 15 he became a student of Sonam Nyima, the most advanced master of iconographic art in the Karma Kagyu lineage. He studied Buddhist thangka painting, mandala design, and other art forms for 10 years.

In 1989, Lama Chopal went to India to complete his monastic training at the major Kagyu monasteries. He studied at Rumtek, the monastery of the Karmapa, and completed his three-year retreat at Sherabling under Mingyur Rinpoche. Thereafter he spent three additional years at Sherabling studying Tibetan monastic arts of torma making, ritual music, and chanting. Lama Chopal studied Buddhist philosophy at Dzongsar College in India for six years.

Following studies in advanced meditation with Bokar Rinpoche, Khenpo Tsultrim Gyamtso Rinpoche, and other Kagyu lamas in India and Nepal, Lama Chopal came to the US, in 2001. He completed two stupas over the course of six years for Kagyu Thubten Choling in New York State, and Samchenling in Virginia. He travels in the US and Asia where his artistry in thangka painting, sand mandala, temple painting, and other sacred forms is requested, and when at home, he is the resident lama at Kagyu Mila Guru Stupa, north of Questa, New Mexico.

ABOUT TRANSLATOR LAMA ZOPA JIGME He is a student of Kyabje Bokar Rinpoche. He has been studying and practicing Tibetan Buddhadharma for over twenty years. He has been teaching and translating since 2005, primarily at the Rigpe Dorje Institute at Pullahari Monastery in Nepal. In 2016, he completed the traditional Karma Kamtsang three-year retreat at Thrangu Rinpoche’s Vajra Vidya Retreat Center in Crestone, Colorado, under the retreat masters Khenpo Jigme and Khenpo Lobsang.

To attend by Zoom, please email: hilece.r@gmail.com so that the evening before a link can be sent to you.

If you have any symptoms of Covid or flu, (runny nose, sore throat, ear aches, fever, cough) please do not come in person. Masks are recommended, though not required; seating will be spaced for Covid precautions.